Daria Klimentova and Cynthia Harvey giving class again today. It is colder and slightly overcast today. Cynthia’s husband arrived at lunchtime, he is a race Director for a Formula 2 team, who were racing in Hungary this last weekend.

Daria’s mother has a little cottage industry going with making leg warmers, these are proving to be very popular. Today I spent the whole day trying to get the blog working with picture galleries, and of course had to upgrade the system which in turn made everything stop working. Jonathan Still, our Director of Music, luckily managed to eventually sort it all out. A worrying moment though.

We have a Czech Television crew fliming here all day today and tomorrow, they have been following Daria for about six years now, and eventually want to make a film depicting her professional career into retirement. They have already made four films about her (which you can find on this site or You Tube. This is a photo of the second day pas de deux group. I shall post tomorrows group then. 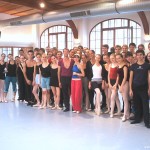 After the days dancing we interviewed Natasa Novotna for the dancers and showed some film of her dancing with NDT (Jiri Kylians Company) and some of her own works for her own company “420People”. They asked a lot of questions afterwards, which is great. She is very artistic, and very together, two qualities not always found together.

I am off now to release a frog my daughter found, back into the lake by the forest near to our house.