I keep forgetting that this is a Czech keyboard, so my y’s become z’s and @’s become ě’s, it looks very strange. In again at 8 this morning to set out the barres for class and clear the TV from last nights interview of Tamas Solymosi by Christopher Hampson, and of course catch up with office work.

At 9 the dancers start to appear, I hear the constant glug glug as they fill their water bottles from the cooler outside the office. I wait for someone to complain that the cooler is empty and then replace the 18ltr bottle.

Daria’s mother makes leg warmers and trousers for dancers and sells them at English National Ballet, they are very popular and each one unique so you don’t lose them. This year she has made a load extra for the dancers here to buy, and my goodness they are popular. 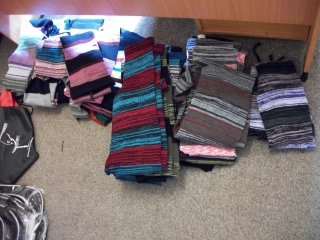 Todays classes are to be given by Tamas Solymosi, Marc Ribaud and Christopher Hampson.

However much you warn them it seems that every year someone loses their wallet or identity card. This year is the turn of Chiara which suprises me as she has been twice before. This of course means that she will have to spend the day reporting it to the police in order to get a piece of paper with a  number on it for the insurance, and then the rest of the day at the Italian Embassy trying to get a new identity card. Luckily her boyfriend who was due to arrive today can bring her some money and possibly her passport.

Anyway here are some photos of the calm before the storm of class. 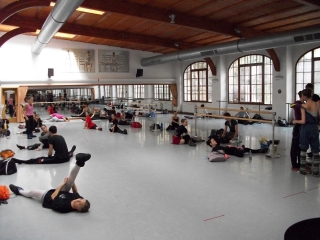 Well it’s been mayhem since I last posted at 10.30. The Italian boyfriend arrived at where he will be staying and called me (I rather rashly said that I would go and get him and bring him to the studios) so I went to get him, and at the same moment it was discovered that our ipod to sound system lead had gone missing so Daria had no sound for her rehearsal. Our nine year old daughter is in today so I left her in charge of the office while I ran for the boyfriend and to an electrical shop for a new lead (very tedious) so that the rehearsal could have sound. Whilst I was away my daughter had sold about ten pairs of the leg warmers that grandma makes, I don’t know where she gets the entreprenurial streak from, her mother and I never make any money. 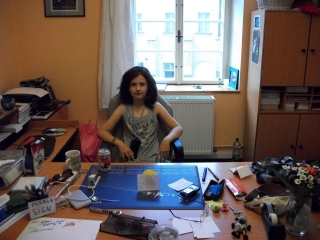 Then Christopher hampson wanted to take his repertoire class using music from a DVD through his mac computer. So arranged that quickly, refilled the water bottle for the third time today (it’s very close outside, I hope it rains soon) then finally grabbed a cup of tea.

This afternoon sees pas de deux with Daria Klimentova and Tamas Solymosi or repertoire in the upper studio with Christopher Hampson.

There is no interview tonight as Fridays are our day of taking the teachers out for dinner. This of course leaves the dancers a nice evening off to explore the magnificent city of Prague.