I’m not sure how many wild nights start at 6 and finish by 9 but a great time was had at the coaches dinner last night. 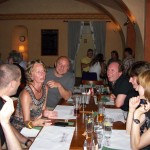 Our daughter was also thoroughly entertained by Viktor Plotnikov (Larissa’s husband), they had a photograph battle for the evening.

I can’t believe the week has gone so fast, today is the last day for about 14 of the dancers, and another 14 arriving tomorrow to replace them. Larissa Ponomarenko will be replaced by Tamara Rojo and Tamas Solymosi by Julio Bocca. That’s a cast list change over to die for, any west end theatre would kill for that line up. Marc Ribaud (Artistic Director of Royal Swedish Ballet) is being replaced by Mark Baldwin (Artistic Director of Rambert Dance Co). Marc Ribaud has been fantastic to work with, when Daria guested with Royal Swedish for him and met him for the first time he was such a nice man that she took the first opportunity to invite him to give class in Prague. All our teachers and coaches are friends who we have met over the years and really like, this way the atmosphere at the Masterclasses is always very relaxed and friendly and we are all approachable.

The end of boys solo saw huge applause for Tamas. I think they have really enjoyed their time with him, he is such a giving man and commands great respect from the boys. Larissa is about to finish downstairs so I have to go and get her to autograph for some photos we are going to give away tonight. 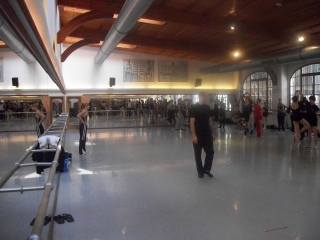 or repertoire with Christopher Hampson 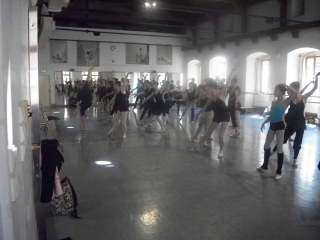 . After this we interview Daria and do our big house clear out by giving away lots of old calendars and shoes and photos etc, plus Gaynor Minden give us lots of goodies to give away. We also show some of Daria’s gala from March, that went out on Czech TV apparently, and an old comedy tape.