So I met Yoel Carreno off the train from Germany and rushed him over to the studios in plenty of time for the boys solo class, the problém was his friend was doing Alicia’s class and had the key to the apartment, so Yoel tried to sneak in and get the key but of course Alicia spotted him and rushed over to say hello quickly.

Anyway for his solo the boys wanted Tchaikovsky pas de deux solo and he obliged. 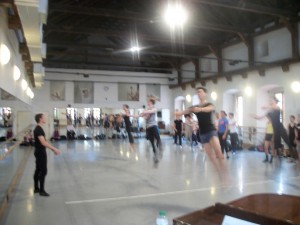 Once we had grabbed a quick lunch of spaghetti bolognaise in the canteen I had to leave Sabina in chargé again whilst I shot up to the airport to meet the 3 late arriving Australians. I saw 3 girls stare at the sign and look at me and then wander off outside purposefully so I assummed they were not them. I was wrong. After an hour and then calling the mobile number one of them had given me, which was her mothers number who I of course woke up in Australia (why give me a number that I cannot get hold you on when I am trying to meet you, this happens a lot unfortunately), she then texts her daughter who finally calls me and tells me they are at the hostel. I then drive to the hostel, give them their passes ofr tomorrow and head back to the studios.

At the studios Alicia Amatriain is waiting for me to ask if I can arrange a physio appointment for her, I phone PdDr Jiri Cumpelik who happens to be in the complex and sees her straight away, very impressive.

Here is our notice board. 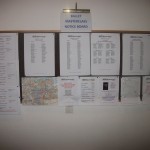 and here are some photos of pre class and the TV crew following Daria around as usual. 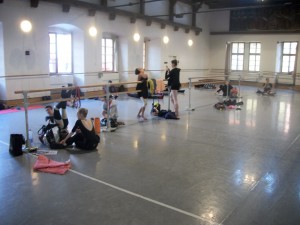 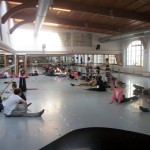 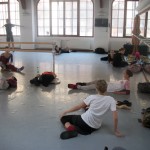 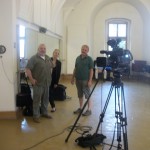