7am 20c. High of 30c today. No cleaners so its all down to me until Monday. You wouldn’t believe the amount of used bloodied plasters that are left lying around by the little angels, let alone everything else. The teachers dinner was very nice last night 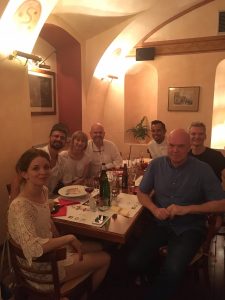 Evgenia was showing us lots of photos of her twin one year old girls and will bring them with her next time, her husband is a well known sculpture in Moscow and has been delayed coming to us until tomorrow because he had an important meeting with the Russian minister of culture about a large commission. It was a successful meeting apparently. Vladimir tells us that he will also bring his son next time, so probably not by motorbike and Glenn is great fun company and told us about his adventures coming up, coaching NYCB in the Red Shoes etc. Christopher Hampsons interview was a great success, he showed some wonderful film of the work they do at Scottish Ballet and there were lots of questions and a group selfie. 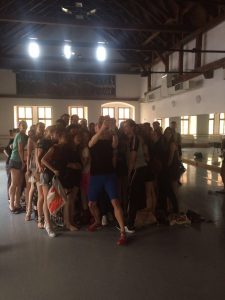 Around about 08.30 I start to get a bit hungry, having not had breakfast, and I make the fatal mistake of having JUST ONE JAFFA CAKE. But of course it is never just one is it?