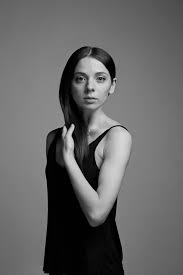 Principal Dancer of the Ballet of the National Theater. A talented young artist, a spirited dancer with a brilliant technique and an expressive experience, she applies throughout the ballet repertoire from the wild Kitri in Don Quixote to the fragile Princess Aurora in Sleeping Beauty  to Odetta / Odilia in Swan Lake. In 2015, she was appointed prima ballerina. Winner of two Thalia Awards: for her portrayal of Lisa in the ballet La Fille had Frederick Ashton’s gardé (2019) and for her role as Tatiana in John Crank’s ballet Onegin (2020).

Born in Chisinau, Moldova, where she began studying at the State Moldovan Dance Conservatory. Then she transferred to the Dance Conservatory of the Capital City of Prague, which she graduated from in 2010. During her studies, she participated in several ballet competitions, won 2nd place in the International Competition in Brno 2009, and won the International Ballet Competition in Romania in the same year.
After graduation, she joined the Prague State Opera Ballet Ensemble, and a year later (2011) she was appointed a soloist. She danced the main role in the ballets Don Quixote (for the role of Kitri she was nominated for the Thalia Award in 2013) ,  Swan Lake  and Myrtha in Giselle.

In 2012 she became a soloist of the Ballet of the National Theater, since 2015 she has been the first soloist. He plays the main roles of the classical repertoire, eg Odetta / Odilie ( Swan Lake by J. Crank), Princess Aurora ( Sleeping Beauty M. Haydée) Nikie and Gamzatti ( La Bayadère  J. Torres), Lisa (The Vain Caution of F. Ashton), Klára in a Dream ( The Nutcracker – A Christmas Story by Y. Vàmos). Central female figures in ballets such as Leonce & Lena Ch. Spuck or Tatiana in Onegin by J. Crank.
From the contemporary and modern repertoire, viewers could see it in the works of P. Zuska (eg Solo for three , Solo for two of usetc.), V. Konvalinky ( Guru / Czech Ballet Symphony II ), J. Kylián ( Bella Figura / Bridges of Time ), G. Balanchina (eg Serenade / Timeless ), G. Tetley ( Rite of Spring / Timeless ), M. Bigonzetti ( Kafka: Process ) or O. Vinklát ( Dumka / Slavonic temperament ). He also collaborates with the Dekkadancers ensemble.

She holds the 2018 Thalia Award for her role as Lisa in F. Ashton’s Vain Caution . In the same year, she was nominated by Dance Europe in a poll for the best dancer.
He regularly participates in foreign gala performances, eg in Bratislava, Košice, Munich or Stuttgart. She toured South America, China and South Korea.