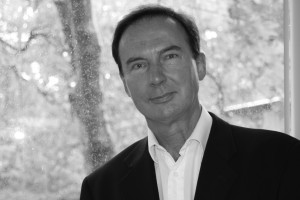 In 1967 he was the first overseas male dancer to be invited by David Poole to join the Cape Town based CAPAB Ballet (now Cape Town City Ballet). He made his debut on the stage of the City Hall as Signor Midas in John Cranko’s Lady and the Fool and was chosen, aged 21, to dance the role of Prince Siegfried in Swan Lake.

He returned to Europe in 1968 to broaden his experience, working in London’s West End, in musical theatre, television and film and took part in the inaugural performances of Northern Dance Theatre (now Northern Ballet Theatre). He was engaged as principal dancer of the Iranian National Ballet in Teheran and then spent two years with George Balanchine’s Ballet du Grand Théâtre de Genève working with Alfonso Cata, Patricia Neary, John Tarras and Peter van Dyk. During his summer breaks, he traveled to Monte Carlo to study with Marika Besobrasova and perform in Princess Grace’s annual Gala de la Croix Rouge.

In 1971 he rejoined CAPAB Ballet and by 1976 had danced the Prince in Swan Lake, The Nutcracker, The Sleeping Beauty, Cinderella and Albrecht in Giselle. Noted for his versatility, he was equally at home in the modern repertoire and for his flair in dramatic and comedy roles, as diverse as Basilio in Don Quixote, Danilo in Merry Widow, Orpheus in Orpheus in the Underworld and Captain Belaye in Pineapple Poll. Many roles were created on him by South African choreographers.

His exceptional skill in pas de deux made him a popular partner and he was much in demand dancing opposite numerous ballerinas in SA and abroad. A highlight was the invitation to partner Royal Ballet guest ballerina Margaret Barbieri in Giselle.

In 1986 he was appointed Ballet Master but continued as Principal Dancer until his 1990 Tribute Performance as the Prince in The Sleeping Beauty. He remained Ballet Master until 2008, responsible for the standard repertoire and the international repertoire of Balanchine, Bournonville, MacMillan, André Prokovsky, Choo-San Goh, David Nixon, Van Dantzig and Van Manen. He continued to perform in roles such as the Rajah in La Bayadère, Karenin in Anna Karenina and Monsieur Germont in Camille. In 2008 he was appointed Artistic Coordinator & Director Outreach & Planning but continues to teach and coach.

As Director Outreach he initiated the Audience Development programme which brings in new young audiences from historically disadvantaged communities and the Apprenticeship and Male Development training programmes, two skills-based, job creation programmes whose participants have the opportunity to perform with the company. Other outreach programmes include children from the Amy Biehl Foundation in Gugulethu and the Jikeleza outreach group in Hout Bay.

Keith organizes the Master Series lectures for ‘Friends of the Ballet’ and the annual Open Day, showcasing the work of the company to the community. He is a Trustee of the Benevolent Fund which he co-founded in 1984 to assist dancers in retraining for new careers and in his ‘spare time’ he is a successful fundraiser.

Keith travels extensively, keeping in touch with developments in the dance world, promoting the company and forging cultural links with ballet companies, directors, choreographers and dancers. Through these links he has been responsible for bringing to SA guest artists of world renown and also ballets of international choreographers such as George Balanchine, Rudi van Dantzig, Hans van Manen, Kenneth MacMillan, David Nixon and John Neumeier.

The Keith Mackintosh Scholarship Fund was established in 2005, with the aim of ‘supporting existing and emerging talent in the local ballet scene’. The inaugural award was made in 2008 to Mlindi Kulashi, currently studying at the English National Ballet School in London and in 2011 he presented the Prague Award competition in Cape Town which enabled two young dancers to attend the 2012 Prague International Ballet Masterclasses under the direction of ENB prima ballerina Daria Klimentova.

You are a fabulous ambassador for dance and an inspiring human being!      Thomas Edur and Agnes Oakes.

You are a superb host and a great coach….     Valeri Hristov, First Soloist, The Royal Ballet

What the Press said:

With his tall and regal bearing, dark good looks and undoubted acting ability, Keith Mackintosh is today acknowledged as one of the most versatile principal dancers in South Africa.      Derek Wilson, The Argus

….. a partner in the Dolin/Macleary class, with an aristocratic stage presence.      Peter Williams, Dance & Dancers UK

… his general bearing is impeccable. Like Byron’s Don Juan, he dances “without theatrical pretence …. like a gentleman”.      Denis Hatfield, Cape Times

Swan Lake  … the most regally impressive prince of all CAPAB’s principal dancers.      Florence Short, The Argus

Dancing opposite Miss Barbieri, Keith Mackintosh reached a new high point in his career. He supported her beautifully and danced magnificently throughout.      Amanda Botha, Rapport

The Nutcracker Prince must number among Keith Mackintosh’s best classical roles for not only did he partner with great care and much elegance, but danced his variations with style, aplomb and fine placing.   Eve Borland, Cape Times

As Prince Charming, Keith Mackintosh has a bearing and presence actors, let alone dancers, could observe to advantage.      Derek Wilson, The Argus

I have seen many, many different Captain Belayes and I believe that Keith Mackintosh is absolutely the most outstanding. Not only is his tongue-in-cheek approach marvelously funny, but he is dancing so well with his Hornpipe solo being all but a show stopper.      Eve Borland, Cape Times

The Two Pigeons …a completely convincing Gypsy Chief. He has the build and the presence that the part calls for and the technique to show it.      Keith Macfarlane, The Argus

As James, Keith Mackintosh …. gave a strong and neatly rounded off performance, he was extremely impressive with his leaps and turns and also with his interpretation of the role.      Victor Holloway, Die Burger

The Rise and Fall of Ruby Crystal