Since September 2014 Daria has been teaching at the Royal Ballet School in Covent Garden as well as guest coaching in Japan and around the world. 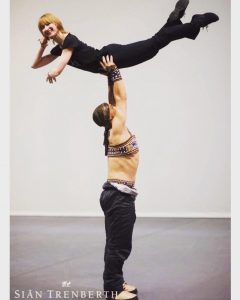 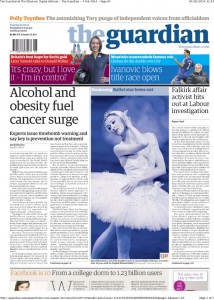 After 18 years as Prima Ballerina with English National Ballet in London Daria has announced that she will be leaving the company after her performance of Juliet in Derek Deanes’ Romeo and Juliet at the Royal Albert Hall on 22nd June 2014 with Vadim Muntagirov. Here are some backstage photos from this last month on tour:

Daria’s book was released on 4th March 2013 and is available for order from Amazon now. 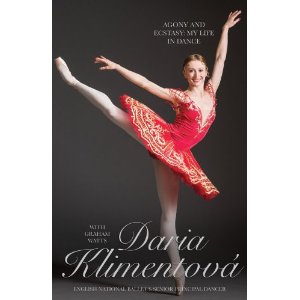 Click this link for the latest interview with Daria.

Daria Klimentova has been one of Britain’s best-loved ballerinas for two decades, having danced at Scottish Ballet and then – since 1996 – as a Principal and Senior Principal at English National Ballet. Her repertory encompasses all of ballet’s classic roles including the double role or Odette/Odile in Swan Lake. Her performances as the white and black swan at the Royal Albert Hall were the subject of a behind-the-scenes BBC Documentary in 2011. Daria was born in the former Czechoslovakia and lived under the rule of the Soviet Union until the Velvet Revolution of 1989. She initially trained as a young member of the Czech Olympic Gymnastics Squad before transferring to ballet. After a year as a Principal dancer in the Czech National Ballet, she moved to dance with the Cape Ballet Company in South Africa, where she witnessed the end of apartheid. In her 40s, at an age when most ballerinas have retired, Daria continues to captivate audiences with her impeccable technique and free flowing natural grandeur. In the twilight of her career, Daria had forged a remarkable partnership with the young Russian Principal, Vadim Muntagirov, which critics have likened to the Fonteyn/Nureyev dynamic. Daria was awarded the Critic’s Circle Patron’s Award by Dame Beryl Grey in 2011 and the National Dance Award for Best Female Dancer in 2012. Away fom ballet Daria is an accoplished professional photographer who ha s exhibited her work widely. She has a dauhter, Sabina. This is a video of Daria and Vadim Muntagirov in the pas de deux from Swan Lake at the Kremlin in summer 2012.

Daria Klimentová is the Prima Ballerina of English National Ballet. She trained at the Prague State Conservatory. Daria has been awarded the Dance Critics Circle, Dancer of the Year Award 2011. She has also just returned from Moscow (August 2012) where she was performing Swan Lake with Vadim Muntagirov at the Theatre in the Kremlin. It is an enormous stage and holds 6000 audience, (including President Putin). Daria was worried about taking Swan Lake to its’ home but the Russian critics said “Normally it is thought that only the Russian Ballerinas are truly empathetic with Swan Lake, however this was proved wrong with Daria Klimentová’s wonderful performance”. That is a fantastic compliment from the Russian public. In 1989 she joined the National Theatre Ballet Company in Prague as a soloist and after one year was promoted to Principal. In 1992 she joined Cape Ballet Company in South Africa as principal, where her repertoire included; Swanilda in Coppélia, Ophelia in Hamlet, Lead couple in Rudi van Dantzig’s Four Last Songs, Sugar Plum Fairy in Nutcracker and Princess Aurora in Sleeping Beauty. In 1993 she was invited to join Scottish Ballet as Principal, where her repertoire included; Lead role in Swan Lake, La Sylphide, Cinderella, Anna Karenina (A.Prokovsky), Haydn Pieces, and Ae Fond Kiss (both by Mark Baldwin). Lead couple in Scottish Symphony (G. Balanchine) and in Bruch Violin Concerto No 1 (C.Tippet), and Wendy in Peter Pan (G Lustig).

[Show as slideshow]
1234►
For all the latest news of Daria click on this link. In 1996 Daria was invited to join English National Ballet as Principal Dancer. She has danced most of the roles in the company’s repertoire, including Cinderella, The Nutcracker, Giselle, Swan Lake, Romeo & Juliet, and Coppélia. She has also worked closely with choreographers such as Glen Tetley (London & Prague), Mark Baldwin and Christopher Hampson, and danced the works of George Balanchine. In 2001 she danced at the London Coliseum with Irek Mukhamedov in a piece choreographed by Irek for them, for a “KIDS” charity Gala. Daria has won a number of awards including the Prize of the Paris Dance Foundation at the Prix de Lausanne, Tokyo 1989, and the Gold Medal at the International Ballet Competition, Pretoria 1991. Film roles include Marguerita in The Lady of the Camelias and Tatiana in A Midsummer Night’s Dream. In 1998 Daria’s life was the subject of a documentary film, and there have been three others made since then so far. Czech TV are following her until her retirement.