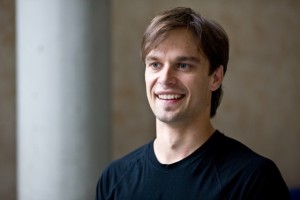 Filip Barankiewicz was born in Warsaw, Poland. In 1986, he began his ballet training at the National Ballet School in his home city and performed in various ballets in Warsaw and Lódz. During that time Emil Wesolowski created a role on him in The Way. In 1991 he won the Waslaw Nijinski Medal. In 1995, he graduated and won the first prize at the National Ballet Competition in Poland. In the same year he was a finalist at the “Grand Prix d’Eurovision for young dancers” in Lausanne. He continued his studies with Marika Besobrasova at the Académie de Dance Classique in Monte Carlo where he received a scholarship sponsored by the Nurejev Foundation and graduated in 1996. Filip Barankiewicz joined the Stuttgart Ballet in the same year. He was promoted to Demi Soloist in September 2000, to Soloist in September 2001. His promotion to Principal Dancer followed in September 2002. Filip Barankiewicz joins the Stuttgart Ballet on tours all around the world. Since 2003 he is dancing as a permanent guest with the National Theatre Prague, Czech Republic, where he performed Siegfried in Swan Lake as well as Petrucchio in The Taming of the Shrew and the title role in Onegin (both: John Cranko) which he performed with different partners such as Tereza Podařilová, Sue Jin Kang, Maria Eichwald and Alicia Amatriain. Furthermore he appeared in several Galas in Prague, Poznań and Krakow as well as in Bodrum, Salzburg, Karlsruhe and Pforzheim. He also danced Petrucchio as a guest with the Ballet do Theatro Municipal in Rio de Janeiro, with the Norwegian National Ballet, with the Leipzig Ballet, with the Ballet of the Semperoper Dresden, where he danced with Leslie Heylmann in 2008 at her Farewell performance, and with the West Australian Ballet. In 2008 he also danced a Pas de deux from John Cranko’s The Taming of the Shrew with Leslie Heylmann in Birmingham at the Farewell Gala for Desmond Kelly, the outgoing Director of the Birmingham Royal Ballet. In 2004 Filip Barankiewicz danced the male title role in Romeo and Juliet (John Cranko) as well as the role of Albrecht in Giselle in 2006 as a guest of the Companhia Nacional de Bailado, Lisbon.

In 2009 he also danced Romeo at the Vienne State Opera with Polina Semionova as his Juliet. In 2003, 2006 and 2009 Filip Barankiewicz has been invited to the World Ballet Festival Tokyo, Japan where he danced with internationally renowned female dancers Alessandra Ferri, Alina Cojocaru and Maria Eichwald. In 2010 he guested with Maria Eichwald at the Polish National Ballet in his hometown Warsaw in John Cranko’s Onegin. At the beginning of 2013 Ballet Director Ivan Cavallari invited him to dance Basilio in the World Premiere of Don Quichotte ou l’illusion perdue by Rui Lopes Graça at the Ballet de l’Opèra du Rhin. In November 2013 he danced the Pas de deux My way (Stephan Thoss) with Alexander Zaitsev at the Gala during the Festival “Three Centuries of World Ballet“ on the occasion of the 240th Anniversary of the Bolshoi Ballet Academy in the State Kremlin Palace in Moscow. On March 29, 2014 he danced with the famous Japanese dancer Miyako Yoshida at the NHK Gala in Tokyo. In April 2014 he was part of the performance when Roberto Bolle was awarded the UNESCO medal in Paris.

Filip Barankiewicz also successfully completed his ballet pedagogue education in 2003. Besides dancing Filip Barankiewicz now also works as guest trainer at the Polish National Ballet in Warsaw as well as at the Ballet of the Czech National Theatre Prague. At the Stuttgart Ballet he coaches rehearsals of The Taming of the Shrew (John Cranko) and Giselle (prod.: Reid Anderson, Valentina Savina). In 2014 he will also coach the rehearsals of John Cranko’s Onegin at the Royal Swedish Ballet Stockholm and at the Finnish National Ballet in Helsinki. During his stays in Stockholm and Helsinki he also gave class. Since September 2014 he is freelance principal dancer, coach and guest teacher.

Leading and Solo Roles with the Stuttgart Ballet

Dances at a Gathering (Jerome Robbins): Role in Green

The Lady and the Fool (John Cranko): Moondog

The Lady of the Camellias (John Neumeier): des Grieux and Gaston

The blue Bird, Prince of the East, Ali Baba

The Song of the Earth (Kenneth MacMillan): male leading role

The Taming of the Shrew (John Cranko): Petrucchio, Hortensio

Further Roles with the Stuttgart Ballet

Now and Then (John Neumeier)

– since 2003 permanent guest at the National Theater Prague: Siegfried in Swan

Lake, Petrucchio in The Taming of the Shrew and the title role in Onegin (both:

do Theatro Municipal in Rio de Janeiro, the Norwegian National Ballet in Oslo, the

Leipzig Ballet, the Ballet of the Semperoper Dresden and the West Australian

-2013: Pas de deux My way (Stephan Thoss) with Alexander Zaitsev at the Gala

Anniversary of the Bolshoi Ballet Academy