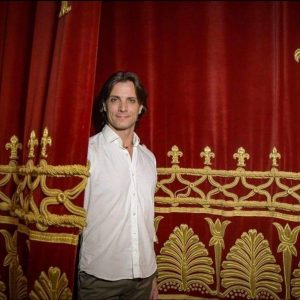 Giuseppe Picone (born 21 February 1976) is an Italian principal ballet dancer, choreographer,  and was artistic director of the Ballet Company of Teatro San Carlo in Naples.

Picone was born in Naples, Italy and trained at the Ballet School of the Teatro di San Carlo. At the age of twelve he was chosen by Beppe Menegatti to dance the role of the young Nijinsky in the world première of the ballet Nijinsky, with Carla Fracci and Vladimir Vasiliev He also trained at the Accademia Nazionale di Danza in Rome and won both competitions of Rieti and Positano.[1]

Under the invitation of Pierre Lacotte at sixteen years old, he joined Ballet National de Nancy as a soloist,[1] and danced in the leading roles of Petruska (M. Fokine), La Sonnambula (G.Balanchine), Paquita (M.Petipa), L’ Ombre (P.Lacotte). In 1993 he joined the English National Ballet in London as demi-soloist, where he danced until 1997, and then, at age 21, he was the first male Italian dancer to enter the American Ballet Theatre in New York as a soloist, with his debut in Ben Stevenson‘s Cinderella.

With Nina Ananiashvili danced the world première of Le Corsaire earning a nomination for the prestigious International Prize Benois pour la Dance. He was invited in Japan at “Nina Ananiashvili and Friends” and at the Gala’ “Stars of Ballet 2006”.

John Clifford, Director of the Los Angeles Dance Theatre, created the role of Humphrey Bogart in the Dance Musical Casablanca.

Under the invitation of Renato Zanella he was the first Italian to guest at the New Years Concert 2005 live worldwide from Vienna.

In Italy guested in many TV broadcasting including, Festa della Repubbica from Rome, the final night of the famous Festival of Sanremo 2009, Premio Caruso from Sorrento and in 2010 was the leading dancer of the Italian New Years Concert from the Theatre la Fenice of Venice.[2]

In March 2010 he was the only Italian dancer to take part at the New York City Center Theatre Galà Tribute to a dance legend – Vladimir Vassiliev. Andrea Bocelli invited him to his famous annual concert in Lajatico (Italy), with such star as Carreras and Italian Pop Star Zucchero. In December 2010 he recorded in Pisa the Galà Concert of Bocelli “Notte Illuminata”.

Since 2004 he has been artistic director of the Gran Gala’ (Picone and The Giants of Ballet).

From 2016- 2020 he was the Artistic director of the Teatro di San Carlo di Napoli Ballet Company. As a choreographer he create a new version of Nutcraker and Cinderella, and an acclaimed version of Bolero. Tchaikowsky Classic, Elegie, Carmina Burana and Homage to Verdi, are among other works he has create in the last years.