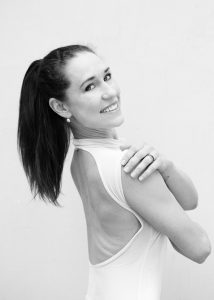 Nikola Márová is the lead principal of the Czech National Ballet.

Her elegance, stellar technique and deep understanding of her characters made her a perfect ballerina for big roles of classical ballet repertory such as Odette/Odile in Swan Lake or Nikia in La Bayadère as well as dramatic roles such as Tatiana in Onegin. Márová is an exceptional artist, who dances in any dance style or technique with the same level of utmost excellence. A principal dancer of the company since 2006, she’s a two time awardee of Thalia Award for her roles of Odette/Odile and Mother in Glen Tetley’s Rite of Spring.

Born in Prague, she began her dance training in Dance school of National Theatre. Then she studied at Dance Conservatory Prague (her teachers include Hana Vláčilová, Zdenka Nemcová and Pavel Ždichynec). During her studies, she also took up two residencies in Dresden

She joined Czech National Ballet in 1999, in 2001 she was named a soloist, in 2006 a principal. One of her first roles include pas de trois in Swan Lake (Harapes, Mazalová) and the main role of Marie in Nutcracker (Grigorovich).

She was awarded a Thalia Award in 2007 for her roles of Odette and Odile and in 2017 for her role of Mother in The Rite of Spring by Glen Tetley. In 2002 she won a Philip Morris Ballet Flower Award for the best ballet dancer of the year.

She was a guest artist with many companies such as National Theatre in Ostrava (Odette/Odile in Swan Lake, Aurora in Sleeping Beauty, Giselle), Finnish National Ballet (Odette/Odile; Greve) or in Thaiwan (Marguerite in The Lady of the camelias; Yu).